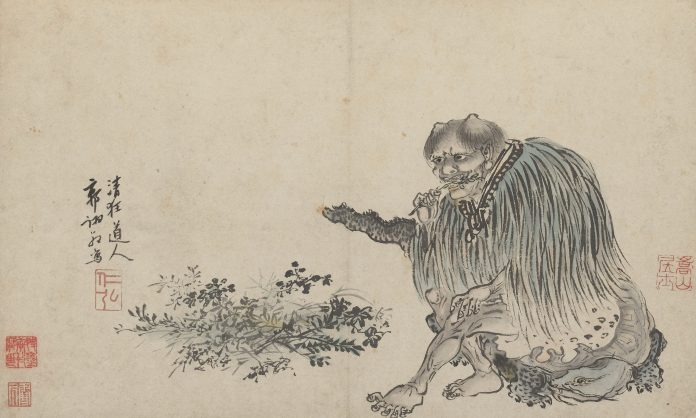 Chinese Medicine has three traditional Taoist sages, of which perhaps the most famous is the Yellow Emperor, Huang Di, who is also known as Xuan Yuan. He may have lived around the time of the Warring States (475-221 BC), but his history has been shrouded in so much legend, that no historian can now be sure when or if he actually existed.

According to Taoist legend, Huang Di, had supernatural capabilities. It is said that his mother conceived him after she was energized by swirling light that emanated from the star constellation known as the Plough. After a 24 month pregnancy she gave birth to Huang Di who was eloquent and capable of entering into deep philosophical debate within a few days of his birth. He became emperor at a very young age; at which time his kingdom became identified by the colour yellow, the colour of the element Earth. It is for this reason that he is known as the Yellow Emperor. In the many myths and legends that surround him, Huang Di is said to have demonstrated great intellect and invented items such as wheeled vehicles, boats, cooking vessels, mirrors, crossbows and other devices, as well as the characters for musical notation.

As regards Chinese medicine, Huang Di is associated with what is considered to be one of the most important ancient Chinese texts: “The Yellow Emperor’s Inner Classic” or Huang Di Nei Jing, that deals with both early Chinese medicine, as well as Taoist philosophy. The text consists of a dialogue between the Yellow Emperor and one of his ministers or physicians, who is usually identified as Chi Po, but in some versions of this text is called Shao Yu.

The Yellow Emperor’s Inner Classic is composed of two volumes (although there is evidence that other volumes may have been lost), the first of which is “Basic Questions” or the Su Wen; it deals with the theory and diagnostic methods of Chinese medicine. The second volume is the “Spiritual Pivot” or Ling Shu, which discusses acupuncture and moxibustion in detail, although it does not seem to distinguish well between the two, as it gives the same indications for both types of treatment.

The content of the Yellow Emperor’s Inner Classic builds upon earlier much more ancient healing practices, but rationalises these to some extent, by declaring that a poor dietary pattern and lifestyle, excessive emotions, an unhealthy environment, and wear and tear due to age are the underlying causes of disease. It reiterates the Taoist concept that man is a microcosm that reflects the larger cosmos and teaches that following Taoist principles that serve to harmonize the fundamental cosmic forces, namely: Yin and Yang, Qi and the Five Elements (Wu Xing), and by dealing appropriately with the environmental factors: wind, damp, hot and cold, one can maintain the balance between man and heaven and earth, and thus preserve health and engender longevity.

The Yellow Emperor’s Classic is still one of the most influential texts of Chinese medicine, despite the fact that the original works have long since been lost and the current versions consists of a compilation of varying texts that were put together at least one thousand years after the original text was thought to have been written. Add to that the facts that books were copied by hand until the invention of moveable type in China at around 1000 AD, and the tendency of Chinese scholars to edit any text they copied, interpolate information and add commentaries, in order to make the information “fit in” with current thought, and it is hard to imagine what the original work may have looked like. Changes to the principles of Chinese medicine have occurred throughout the ages, for example in an early concept Qi was thought to be contained in the blood and flow back in a centripetal manner near the surface of the body through hypothetical channels called meridians, to the core of the body “like rivers flowing to the sea.” This concept was abandoned in the 11th century AD in favour of the current closed flow system that only involves the Chinese medicine meridians.

In addition so called translations of the Yellow Emperor’s Classic into Western languages often leave, to put it mildly, a lot to be desired; they are – with some exceptions – often little more that modern manuals that are loosely based upon this classic.

The Other Two Sages of Chinese Medicine.

Apart from Huang Di, there are two other Taoist legendary sages of Chinese Medicine: Fu Xi and Shen Nong.

The second Taoist sage Fu Xi is said to have lived the middle or late Paleolithic or early Neolithic period, at around 3000 B.C. The legend has it that  Fu Xi had a human head and a snake-like body. Fu Xi is said to have married his sister Nu Wa, and to have had a number of offspring by her. According to legend, Fu Xi discovered the flow between Heaven and Earth which he embodied in the principles of Yin and Yang.He is also credited to have written the “Book of Changes” or the I Ching, which represents all qualities, events and forces of the cosmos by simple diagrams composed of three horizontal solid and broken lines that are stacked one above the other. These diagrams form the eight trigrams of the I Ching: Qian, Kun, Kan, Li, Zhen, Gen, Xun and Dui.

It must however be remembered that these implements would have looked very much different than the tools used today, as they would have been made out of the materials available at the time, namely bone and stone.

Shen Nong is the third of the three legendary Taoist sages of Chinese medicine. Like Fu Xi, he is also thought to have lived at around 3000 BC. He is believed to have taught people how to identify different kinds of plants and how to grow crops. According to legend, Shen Nong’s body was almost transparent, to the point where his internal organs and any food he ate could be observed from the outside. The legend states that in his time little was known about which foods and medicines could be used safely, with the result that death from famine and from poisoning was common.  In order to alleviate this suffering, Shen Nong decided to taste hundreds of plants, since he could tell which plants were nutritious, which had medicinal properties and which were poisonous.

According to the legend, he climbed mountains during the daytime to taste plants and lighted a bonfire at night in order to be able to write down his records. Shen Nong went through great trails and hardships in order to taste every plant he could find, but in the end finished up losing his life to poisonous plants. It is claimed, although extremely doubtful, that the volume Shennong’ s Materia Medica records the results of his efforts.

Causes of Disease in Chinese Medicine

What is Chinese Medicine?